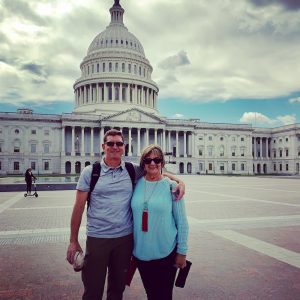 The opening lines to a famous song in “The Sound of Music,” say the beginning is a very good place to start.

In the beginning, they were Marc and Alowetta, two people that had already been around in the world for a while. Not youngsters, but not out of their twenties when they met in small-town New Mexico.

It was a storybook introduction – He was fresh out of college and worked for her father. She was a divorcee with two young children. They had a juicy one-year courtship, where he worked two jobs 6 days a week; she worked a full-time job, had kids to tend to, and helped out in her family’s business. They usually spent some Sundays together while he did his laundry at her house.

They had four real dates.

Has it been a storybook life?  Only if you like fairy tales written by Tim Burton or Stephen King.

It has been hard.

And it has been good.

But it hasn’t been ordinary.

And as I write this, we are in our sixth year of living in a 40 ft motorhome, traveling and working together in less than 350 square feet.

To put it politely, we have lived a lot of life.

We began married life with two children, one of whom was terminally ill. We lost her 1 ½ years into our marriage at 9 years old. We decided on more children, even though the age difference would be 10 years between the oldest and youngest.

We’ve been through the trials of two working parents with three boys in daycare, school, sports, and teenage shenanigans.  They all graduated, have made their way in life, own homes, have wives and children, and never went to jail. We feel successful in parenting!

We have been business employees, general managers, executive directors, district managers, senior staff members, minority business owners, and now 100% business owners. Our years of working for others seem a blur sometimes because we both spent our 30s and early 40s working high-profile, high-responsibility jobs, with many more hours than the typical 40-hour workweek.

Do we know it all? Not by a long shot. Has it happened to us? Probably.

What we want is to share our experiences with you, answer the dreaded questions that you as couple-preneurs may have, and learn from you. Yes, we believe we can (and still want to) learn from other couples who are living and working together.

Join us on the journey – share yours, and learn from others who are navigating the world of living and working together in Married to Business!